A Man Walks into a Shadow Bank

Intrigued by mainstream journalists’ investigations into predatory lending practices, on 16 August 2018, I walked into a type of shadow bank. It was a pleasant-looking storefront, flanked by a mattress store and a doughnut shop in an everyday strip mall. I was interested in the first-person experience of how one type of nonbank lender interacts with someone who walks through their door. When I walked through the door, every eye in the place surveyed me. A wide-smiling man, introducing himself as the branch manager, invited me to sit with him at his desk.

Before I could say a word, the manager said, cheerfully, “I’m so glad you came in, sir. We would be very happy for you to apply for one of our loans.” He continued: “The whole thing only takes a few minutes. You make an online profile, fill out a few questions, and that is it. We can do it now together, if you like.” Realizing I was out of my investigatory depth, though still wanting to learn, I said, “Is there anything I can take home and read? Is this like a loan from a bank?”

A (Brief) Introduction to Shadow Banking

When reviewing shadow banking, one thing is clear: It is a huge and growing phenomenon. By the end of 2016, it was over $45 trillion and had grown by 50 percent over the previous six years (Figure 1). 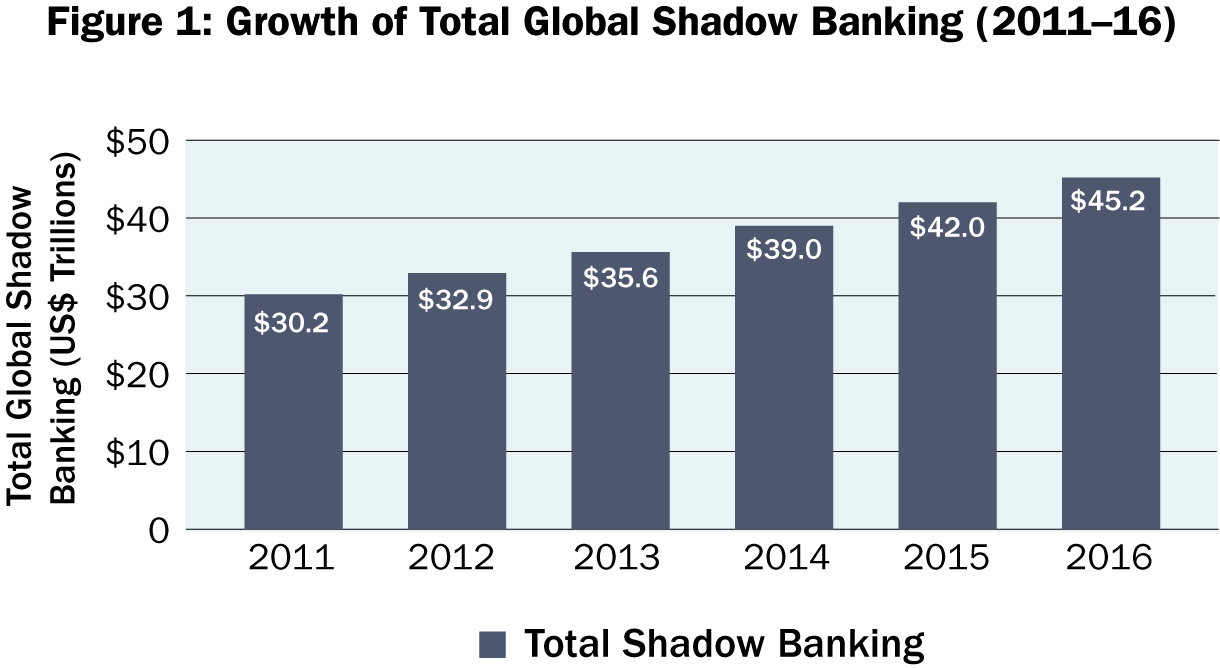 Since shadow banking can refer to many things, the first thing needed when discussing the topic is to define it. “Shadow banking” refers to two parallel activities.

1) Any credit intermediation (e.g., lending) conducted by an institution not regulated as a traditional bank

In terms of nonbank credit intermediation, the term “shadow” simply refers to these nonbank credit intermediaries operating without the same regulations as traditional banks. Shadow banks engage in bank-like activities (e.g., intermediation of credit, liquidity and maturity transformation) while operating outside of the traditional banking system, including its oversights, protections and regulations.

While the term “shadow” may bring to mind purely predacious and exploitative behavior, this is actually only a very small part of total shadow banking activity (about 2.4 percent). That said, traditional financial institutions appear to be capitalizing these subprime third-party lenders on an increasingly frequent basis. Lendmark raised debt financing from Wall Street banks. Wells Fargo, Barclays and Deutsche Bank partnered to lend Exeter Finance $1.4 billion. Bank of America lent loanDepot $250 million. As well, this capital was flowing to subprime lenders while the banks themselves were shuttering their internal subprime lending units. For example, while Wells Fargo closed its subprime lending unit in 2010, it had over $80 billion in loans outstanding to nonbanks by the end of 2017. More broadly, by 2016, loans to nonbanks was the fourth-largest category of commercial bank lending overall.

Subprime and unsecured personal lending aside, experts appear to agree that nonbank financing from robust and resilient institutions can be a good thing. As an alternative to traditional bank financing, it may support economic growth, and corporations and households alike may view and use it as a diversifying source of credit supply. Indeed, nonbanks now supply around 40 percent of total global credit (Figure 2). 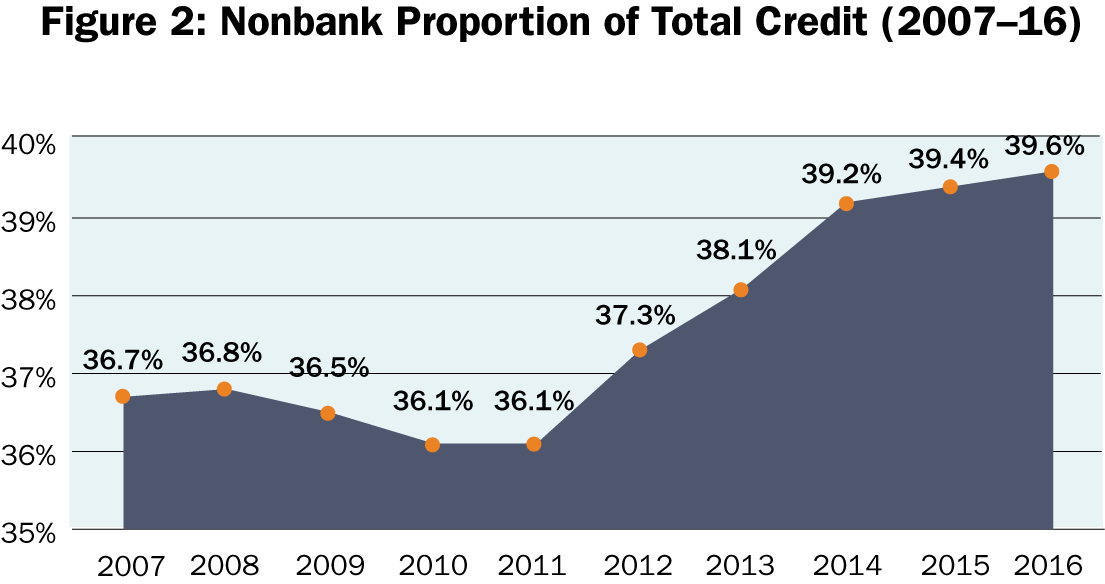 The credit intermediaries in this portion of the shadow-banking ecosystem may come as a surprise. They are not storefronts in strip malls, but rather they are insurance companies, pension funds and “other financial intermediaries,” or OFIs (e.g., asset managers, broker/dealers, hedge funds). Their credit intermediation has skyrocketed since the global financial crisis, too (Figure 3). Further, large, brand-name intermediaries and pension plans appear to be willing — even eager — to assume subprime lending risk. In August 2018, Willis Towers Watson’s global head of credit was quoted as saying the company was attracted to nonqualified mortgages (i.e., those unable to meet the “ability to repay” rule) in the U.S., and recommended investors direct capital towards this segment. As well, large pension funds have overcrowded the upper middle market for direct lending, causing smaller ones to chase returns by lending to less credit-worthy borrowers (Figure 3). 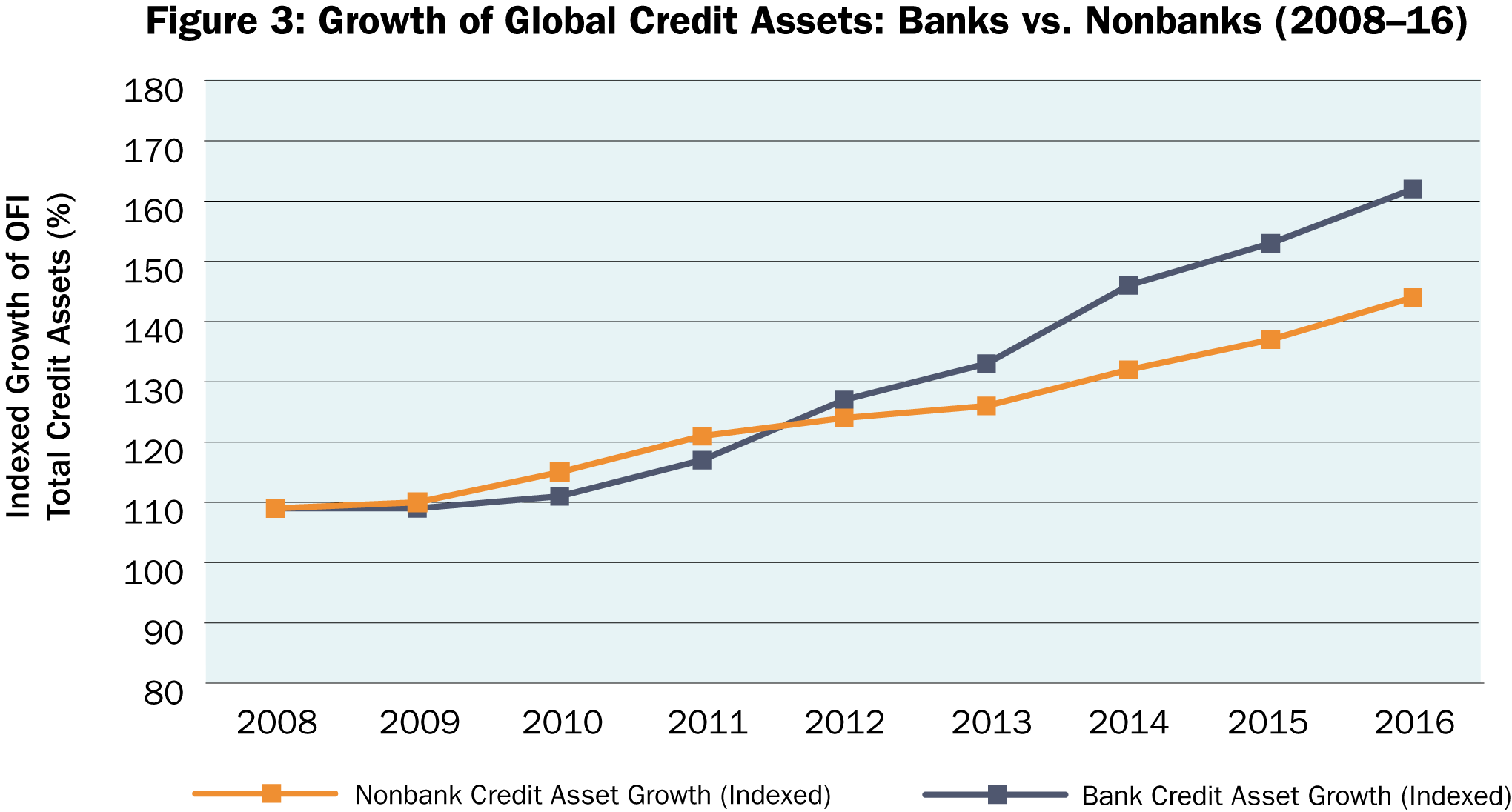 While a colossal market in size and growth rate, nonbank credit intermediation does not appear to the primary cause for concern when considering the systemic risks posed by shadow banking. To use a simple example, if every customer for whom Sears has financed an appliance, or for whom Ford has financed an automobile, were to default on their loans to Sears and Ford, it would definitely be a shock to those financing companies. However, it would unlikely be a shock to the global financial system.

For that, we turn to…

The second shadow banking activity is another story altogether.

Regulations following the financial crisis imposed a number of lending constraints on deposit-taking banks. The “deposit-taking” piece is important, as deposit-taking banks benefit from deposit insurance, such as from the Federal Deposit Insurance Corp. (FDIC) in the United States (and comparable institutions in respective countries).

In the context of deposit insurance existing, part of the flagship regulations passed after the global financial crisis sought to solve what is referred to as the “moral hazard problem.” Simply defined, the moral hazard problem is an increased appetite for risk when the cost of assuming that risk is borne by someone else.

Recent estimates reflect that the five largest deposit-taking banks in the U.S. hold over 40 percent of total U.S. bank deposits. In addition to their deposit-taking business, these institutions have other large, global businesses as well (e.g., asset management units or investment banks), whose activities and capital are not insured by an organization like the FDIC. The moral hazard problem manifests itself when these institutions take risks they would not otherwise take because a large part of their business — the deposit-taking portion — is insured.

Measuring Risk in the Dark

As it turns out, a combination of regulatory constraints and accounting rules still allows deposit-taking banks to extend unknown amounts of credit to entities that do not show up on their consolidated financial statements. It comes in the form of lines of credit and flows to unconsolidated subsidiaries like “special purpose vehicles” (SPVs) and “structured investment vehicles” (SIVs), which do not show up on the balance sheet. Several of the OFIs described in the nonbank credit intermediary section serve as the primary source of capital for these SPVs and SIVs.

Now, let us suppose that these SPVs and SIVs buy potentially insolvent assets — say, subprime mortgages. Should an event occur that causes the OFIs to withdraw their capital from the SIVs and SPVs en masse, the entity would draw on its line of credit from the deposit-taking bank.

Therein lies the harrowing risk of this aspect of shadow banking.

These lines of credit only show up on bank balance sheets as they are drawn. The balance sheet might show nothing or $1 or $1 billion at any given time, but the total exposure is never known unless something goes very wrong.

To illustrate the systemic risk, suppose that a set of “Systematically Important Financial Institutions” (SIFIs, which have been referred to as the “too big to fail” financial institutions) have sets of similar off-balance sheet subsidiaries capitalized by similar OFIs, and they engage in similar activities such as investing in subprime mortgages (for example). Then a shock of some kind occurs to cause the OFIs to pull their capital from the subsidiaries, causing the subsidiaries to draw on their lines of credit, creating vulnerabilities in the balance sheets of the banks, requiring FDIC insurance to make deposits whole.

If this occurs in a wave, the FDIC (and comparable institutions in respective countries) may not able to make all deposit-taking parts of all bank balance sheets whole, causing a domino effect with unknown consequences.

It is not to say all banks partake in activity like the example above. In fact, there is no way to know. This example merely illustrates that this phenomenon contributes an unknown amount of systemic risk into the global financial system.

Part of the challenge of determining what systemic risk shadow banking contributes to the global financial system is that stress tests exist to study and test the effect of individual shock on banks. No such tests or models appear to exist to evaluate off-balance-sheet secondary lines of credit to unconsolidated subsidiaries (for example).

Perhaps this should serve as an alarm to regulators and organizations such as the Financial Accounting Standards Board. As we learned at the most recent University of Virginia Investing Conference, while we have learned a lot — and done a lot — to improve the resiliency of our financial system, perhaps more work remains to be done.

Does a Crisis Lurk in the Shadows?

The Secrets of CEO Performance and Integrity Hidden in Accounting Data ">

The Secrets of CEO Performance and Integrity Hidden in Accounting Data 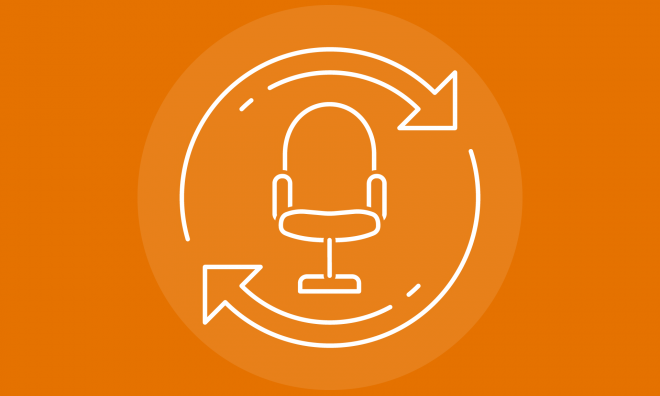